UPDATE 3/29/14 10:26 AM: Here is an English translation of the below Arabic statement:
In the name of Allah Most Gracious Most Merciful
Praise be to Allah who said “Say, “This is my way; I invite to Allah with insight, I and those who follow me. And exalted is Allah ; and I am not of those who associate others with Him.””
And may peace and blessing be upon the one who said “By Allah, if Allah were to guide just one man through you it would be better for you than red camels” and upon his family and companions
Al-Baserah Media Productions (@Albasira_jn) is an official institution belonging to Jabht Al-Nusra. It was established to publish Islamic lectures and lessons by a group of scholars, seekers of knowledge who are mujahideen from the land of Ash-Shaam.
All that is published by it (Al-Baserah) represents the jama’ah (Jabhat Al-Nusrah) and its methodology and officially expresses its views and its Islamic policies.
Members of the Islamic Council of Jabht Al-Nusra on Twitter:
@alghreebmohajer (Sheikh Abu Maria Al-Qahtani)
@sami_oride (Sheikh Dr. Sami Al Oraidi)
@abusulayman321 (Sheikh Abu Sulayman Al-Muhajir)
We ask Allah to preserve them and keep them firm on the truth.
Further, we announce that whoever has clear abuse and/or offences in their writings or transgresses our group’s policy then he will face an Islamic trial in that regard, and whoever does not adhere to our group’s Islamic policy regarding its media will be sent to an Islamic court and may be discharged from the jama’ah (Jabhat Al-Nusrah) if need be.
We call upon all our brothers and our supporters to adhere to Islamic manners that befit every Muslim upon the truth, calling towards it, defending it and performing Jihad with his writings and speech.
Further, we call everybody to support the jihad and its people by means of their official channels, and defend their honor by wisdom and good preaching.
Allah (swt) says:
“Invite to the way of your Lord with wisdom and good instruction, and argue with them in a way that is best. Indeed, your Lord is most knowing of who has strayed from His way, and He is most knowing of who is [rightly] guided.”
Jabhat Al-Nusra
Al-Manarah Al-Baydaa’ Media Productions
Do not forget us in your prayers.
Sunday 1st Jumada Al-Ula, 1435
3rd May, 2014
____________ 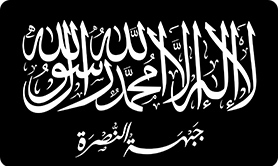