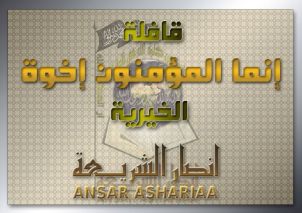 Yesterday, the salafi group Ansar al-Shari’ah in Tunisia provided aid in a convoy to residents in the city of Haydrah (Haïdra) in West Central Tunisia who have been hit hard by extremely cold weather. This may give pause and alarm to the elites in Tunis. As Erik Churchill, based in Tunisia and an independent development consultant, pointed out to me: “The French speaking elites have been patting themselves on the back the last few weeks for their ability tomobilize aid to these regions. Ansar al-Shari’ah’s work shows that the elites (both secular and an-Nahdha) do not have a monopoly on this kind of social work.”
Over the previous few weeks, there has been a major cold front, which included sub-zero temperatures and snow in northwest and west central Tunisia in regions within the governorates of Jendouba and Kasserine. Due to the remoteness of some of the locations and coinciding with many strikes and protests by factory and distribution center workers, there has been a major shortage of essential goods to stay warm and replenish food supplies. According toTunisia-Live:

Despite the fact that the new interim president and members of the interim government have visited several regions of the country in the past week, no efficient measures were taken to deal with the scarcity of essential goods in the North West.
However, while the government has failed to provide an answer, Tunisian citizens have tried to create solutions. A group of Tunisians living in Germany started a volunteering company, using social networking to collect covers and clothes for those struggling with the cold in the deprived rural areas of the north-west. The group of Tunisian-Germans were looking for more volunteers within Tunisia to help them deliver covers and clothes to families in need.

Additionally, Qatar and UAE both sent airplane loads of supplies. There are also indigenous Tunisian groups that have attempted to assist, including El Kolna Twensa, Le PaCTE Tunisien, the Enfidha airport workers, and the Assabah/Le Temps newspaper group. Part of the issue is the lack of access due to roads being blocked by as many as 2.5 feet of snow in very rural areas. Although efforts were difficult, an-Nahdha did mobilize some of its supporters to help with relief efforts.
The secular-affiliated relief groups and organizations have targeted its aid more so to the governorate of Jendouba, since that region is viewed as more independent, moderate and socially liberal; whereas areas in the governorate of Kasserine are seen as more amenable to the message of a group like Ansar al-Shari’ah in Tunisia. Although the snow has receded in some of the areas, the temperatures remain cold and residents such as in the city of Haydrah, which is in the governorate of Kasserine and about an hour northwest of the city of Kasserine, are still struggling to survive the harsh conditions.
Click here to read the rest.